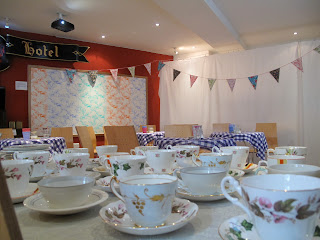 On Sunday 29th April, on a very rainy afternoon, I could be found in a very secret and secluded city location in Cambridge, just to make a refreshing change to the usual clean countryside air that I am usually enjoying… hehe.
The Folk Museum in Cambridge is a local treasure that often gets forgotten by us all, but is also host to a gorgeous  vintage tea room which opens most Saturdays throughout the year. The museum is run by two equally fantastically enthusiastic treasures in the form of Tamsin Wimhurst and Susan Miller who were great fun to work alongside for this particular afternoon tea. These lovely ladies are hilarious and it was great fun reading up on cake history before the event in order for us to plan the cake menu to go with Tamsins’ educational yet amusing talk on the calendar year and the cake traditions it has offered over the years. 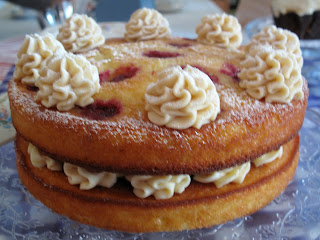 Now, my old school friends will know that my History teacher and I never saw eye to eye and I ended up being quite the trouble maker in this particular lesson at school. So I deserve the grade that I received for GCSE History and I do find it very difficult to feedback History that I learn, however I was on hand to do what I do best as a hostess and make tea and coffee for my chilly guests and help warm their cockles on such a typical April day in the UK, including a couple of my lovely American guests who had joined us to learn a few stories whilst here in Cambridge.
Credit has to go to Tamsin and Susan for entertaining us and allowing my guests to explore the Folk museum with a tailor made trail that each guest was provided with to nosey at the exhibits relating to our cake-based talk, including a loaf of sugar that they currently have on display as well as a 19th century food processor and an apple corer and peeler. They also had Salamanders (A press put into the fire until red hot to brown the top of cooked meat or baked items), wooden storage barrels for flour, Queen Mary’s Tea Caddy which was presented to the museum as a gift when she visited in 1937 as well as Queen Victoria’s Jubilee Crockery. 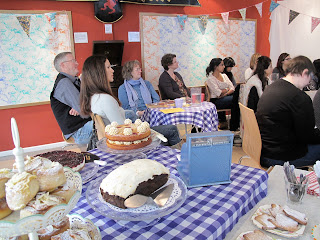 Cambridge is not steeped in masses of Cake-based history itself, not from what we can find anyway, however we do know that the Giggle Cake is said to stem from the Fens (a boiled fruit cake using cherries and pineapple) and the elusive Cambridge Cheese is also said to be a food that has lost it’s history, so should anybody know about this soft cheese, please do come forward, we would LOVE to pick your brains.
So, starting in January and the New Year, Tamsin educated us all on Plum Cake for Winter Solstice, of which used to be made with a hole in the centre for the baker to place on the horn of an ox. The ox would then throw the cake off and if it landed in front of the ox you would have good luck for the rest of the year! If it landed beside the ox, behind it, well… no luck for you (Which would have been myself included ; ) 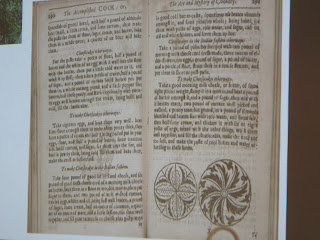 We learnt about many cakes and their fun stories that go with them, for example:
St Agnes Feast, where it was traditional to bake Dumb Cake. A doughy bread meant to be eaten and then the girl must walk backwards and jump into bed… this was meant to make the eater dream of their future spouse!
Hot Cross Buns (The boys in Cambridge used to shout “Hot Cross Buns, Hot Cross Buns, Full of Sugar, Full of Butter & lots of plums” – Plums, meaning currants : )
Not forgetting Good Friday Skipping, of which used to take place up until the end of the Second World War, including on our very own Parkers Piece in Cambridge. Families would take a picnic and long ropes to jump with, it was said to come from an ancient fertility rite where the men would turn the rope and women would jump over it. Sweets, ice Cream, drinks and toys were sold at these sort of events and it was a real family day out.
I actually avoided making Hot Cross Buns as we have just passed Easter, however I did make a gorgeous Almond & Marzipan Brioche instead as a smile to these and the… 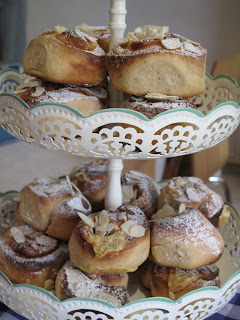 Simnel Cake, of which was traditionally eaten on the fourth Sunday of Lent, where you could eat all of the forbidden foods in one cake as a one off whilst fasting. It was traditionally eaten on Mothering Sunday, which Tamsin told us was originally named after the day that people would visit their “Mothering” Church, but nowadays is a day to spoil and treat our own mother or mum.
Tansy, a herbaceous flower and also an ingredient that has long gone out of fashion was used to make Tansy Cake or Tansy Custard, but it seems to have faded during the Victorian era. The Tansy cake was almost like a cheese cake made with a whopping 18 eggs in one recipe that Tamsin had managed to dig up.
I had mistaken Tamsins’ “Cheesecake” research and actually made a chilled Cherry & Chocolate Cheesecake… so not a cake as such, but a welcome choice to my afternoon tea guests all the same hehe. 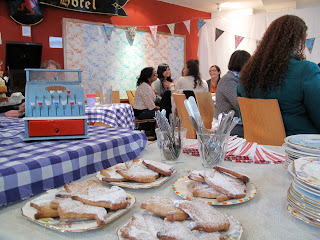 May Cakes were eaten traditionally on May Day (A day for celebration of Milk Maids) made with pastry and an almost savoury mince. It seemed to have been a regional recipe and changed from one end of the country to the other, with it being almost like a custard tart further south of the UK.
We learnt about Whitsun and Gooseberry Tarts or Pies being another delight that seems to have gone out of fashion over the years. 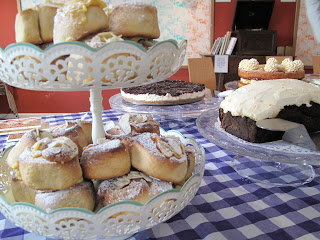 We found out that Cambridge used to be home to one of the largest fairs in Europe, Stourbridge Fair on the River Cam, which is still celebrated to this day, albeit on a smaller scale nowadays. The food of the fair used to be Gingerbread, fashioned in intricate wooden moulds which moulded the biscuits into shapes of women and men or “Husbands & Wives” which has now been replaced by doughnuts and candy floss as the food of choice in our lifetime. It is said that even William Shakespeare was a fan of Gingerbread and has even quoted it in his work.

I baked a gorgeous Carrot & Gingerbread Loaf with Orange Cream Cheese frosting as my ode to this sweet treat. 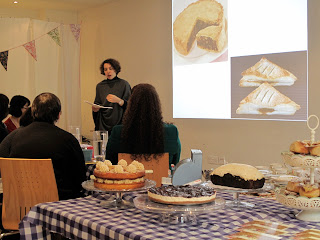 We also have another great sweet link in Cambridge in the form of Reynolds Fruit Rock, which was made locally and sold on Cambridge Market and at the fairs. It used to take him weeks to prepare for such fairs and make his famous fruit flavoured rock around 1846. The sweet stall on Cambridge market is called “Reynolds” and is linked to Mr Reynolds himself. This made us all smile, we all knew exactly where he is located.
How about a winter warmer in the form of a “Sheep Shearing Cake”?!… Likened to a fruit tea cake, with currants and no sugar. It was made by farmers and their wives at Sheep Shearing season, the better the cake tasted, the more memorable their farm was… 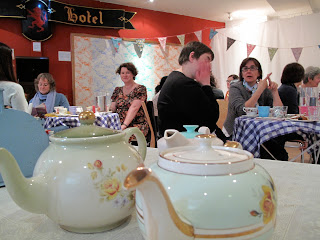 All Souls Eve would be where the poor of the village would beg for cake, this sweet gift was also known as the “Dole” and this is where the term “On the dole” is said to come from. Soul cakes were flavoured with caraway seeds and I actually made these in the shape of teapots for my guests to nibble on with their cuppa to see how they tasted, they weren’t bad at all.
St. Clements Day was a day celebrating Black Smiths, but also bakers later on. In 1837 Cambridge hosted it’s very own sit down meal to celebrate local bakers on Parkers Piece, where everything was planned and set up within just 2 weeks. Amazingly they baked 4,500 2lb loaves and boiled 1,608 Plum Puddings for the diners. Now that was a feast worth going to!… I wonder if you could easily recreate such an event now?! 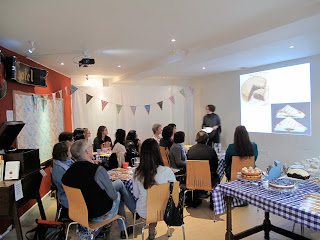 We learnt so much more, I could be here all day, so thank you lovely ladies of the Folk Museum and I am so very much looking forwarding to our next event together on:
Sunday 1st July at 3pm
with a talk titled “From Tea Parties to Tea Rooms”…
More info to follow on the blog very shortly, so do keep your eyes peeled!
And thank you to all of my fabulous guests for joining us, some of which have blogged about this event, so I have linked them below for you to read up on their experiences of our afternoon tea party:
Maria at Sudden Flashes of Inspiration
Simone at The 1930’s House
And my full Photo Album from this event
And don’t forget to take a visit to The Cambridge Folk Museum! 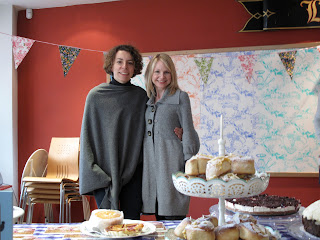 And lastly, a recipe that Tamsin would like to share with you all and which made us all chuckle and gasp at certain elements of this great bake!
Do let us know if you attempt bake it yourself and how you find it to eat, we would love to hear about it.
Epiphany cake recipe
– “Mrs. Goodfellow’s Cookery As It Should Be“ 1865.

Twelfth Night Cake Recipe Directions:Cream two pounds of butter and two pounds of sifted loaf sugar; take one large nutmeg grated, half an ounce of ground allspice, one teaspoonful of ground cinnamon, the same of ginger, the same of coriander seeds, and one wineglass of brandy; mix these well, then beat very light eighteen eggs; cut into thin slices half a pound of citron, and the grated rind of two lemons; beat this for at least half an hour until perfectly light; line the pan with buttered white paper, and bake in rather slow heat for four hours: when nearly cold, ice it as directed. 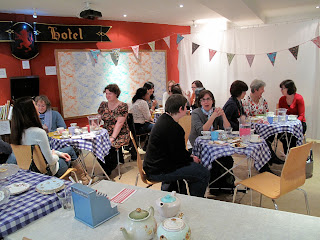