Filming With BBC One’s "Escape To The Country" 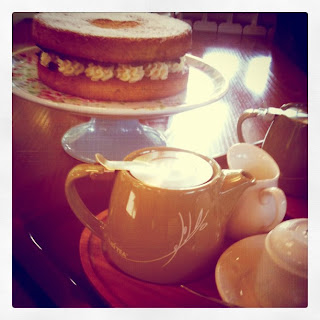 Earlier this year, back in June in fact, I was contacted through Facebook from a lovely gent called Mark who was claiming to be the Director of the BBC One Show “Escape to the Country” and he was looking to ask my advice on Afternoon Tea Etiquette specialists in the UK after hearing about my (then, upcoming) Etiquette of Afternoon Tea workshop.
VIDEO CLIP HERE.
So, as requested, I arranged a quick chat with him on the phone in my lunch hour and we ended up nattering for a good half an hour about all things afternoon tea related and I had assumed by the time he had hung up that I had bored him to death with my geekery and put him in touch with some of the contacts in my little black book (of which are all in my head!) 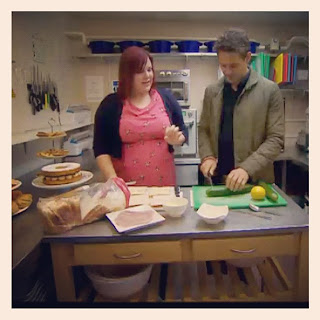 Well, it turns out that by my nattering on about the history of the Victoria Sponge and our more locally rumoured cakey concoction, the Giggle Cake, he had been impressed by my enthusiasm for the subject and told me that he wanted to book me for the show instead of the contacts that I had provided him with. I wasn’t sure that he understood the fact that I wasn’t an *Expert* in afternoon tea, however he assured me that he just wanted a passionate geek to stand in front of his camera for a while and waffle about Afternoon Tea. I got rather excited.
This wasn’t just any location either… It was to be filmed at Woburn Abbey, the holy grail of afternoon tea. I was nervously sold by the idea of not only getting a very exclusive tour of The Duchess of Bedfordshire’s old digs, but getting to cook in the kitchens… What an honour. 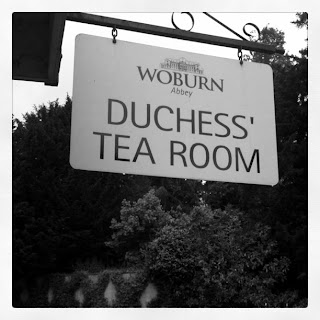 I booked a prompt days’ holiday due to it being just 4 days away (eek! And thank you Nick!) and I took my sister with me for moral support and had pre-baked a Victoria Sponge with jam made by my lovely jam lady as well as the lesser known Giggle Cake, which always seems to over cook and look a little unappetising from the outside, but this beauty packs a gorgeous buttery and fruity punch, trust me. These were to sit behind us with some other treats during the feature, whilst I showed the gorgeous presenter, Alistair Appleton, how to make traditional cucumber finger sandwiches fit for a tea party in the kitchen.
I was in my element. 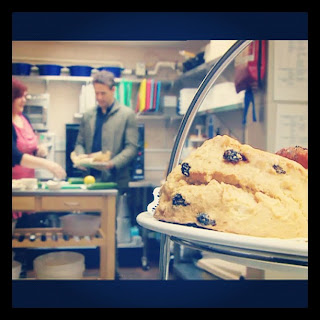 When I was introduced to Alistair, having never met him before and now knowing if he even had a diva-like reputation, I was suddenly very nervous and worried that I would forget everything they wanted to know, but he made me feel at ease right away.
He came over and shook my hand with the warmest smile I’ve ever had the pleasure of experiencing, he was just lovely. After our introductions all round, to my sister and to their equally friendly camera and production team, Alistair asked me more about The Secluded Tea Party and how I came to find my love for baking. His eye contact was very soothing ; ) 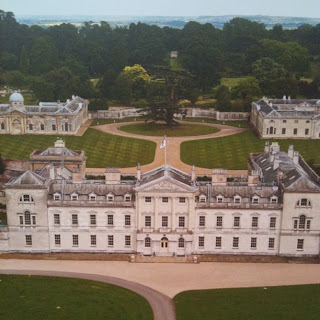 We were then led into the kitchens of the Duchess’ Tea Room situated next door to the Abbey itself. With the camera set up, Alistair and I literally got chopping cucumbers for our perfect cucumber sandwiches, buttering slices of bread and literally just put the world to rights. We talked about the upcoming Olympics and the spa that had cucumbers dangling from the ceiling for its guests’ eyes and chatted about the travels he had been on with the show and about his home in London. All whilst being filmed, purely just for the shots of us in the background.
For all I know, as you watch this feature, we are actually talking about Hackney Cabs and dog walks whilst they are zooming in on us… That’s quite amusing. 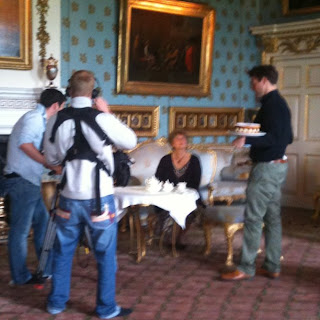 Mark filmed us chatting, chopping, then a little structured filming on the history of the finger sandwiches, the cakes on offer and preparing the tier to be taken over to the lovely Beryl Peters, Etiquette Expert, who would be filming a feature on the Etiquette of Afternoon Tea later on in the Blue Drawing Room where The Duchess of Bedford would have stuffed her face to fill that gap. The true honour there was the fact that Beryl was allowed to sit on the original furniture, usually closed off by a rope to the general public. We were, of course, followed by the PR Team at Woburn Abbey to ensure that we didn’t do any damage to anything and they were equally as friendly and accommodating. 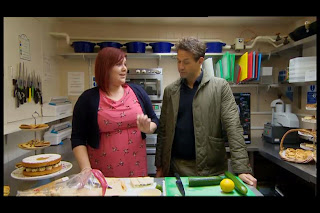 This is my first experience of filming a feature like this and watching it back on “Escape to the Country” yesterday was very odd indeed, as it was cut right down, as it would be and seeing myself on camera was very weird indeed. Not only because since this feature was filmed, I have lost 2 stone, but the camera work is just fantastic on it. I’m easily pleased ; )
But the camera was a couple of feet from us in the kitchen, but it looks like they were at the polar opposite side of the room, very clever indeed. It’s why I was so nervous in here, as it was literally in my face and very hard to not look into the lens (as instructed not to!) but Alistair really did help to calm my nerves, he is a true British gent. 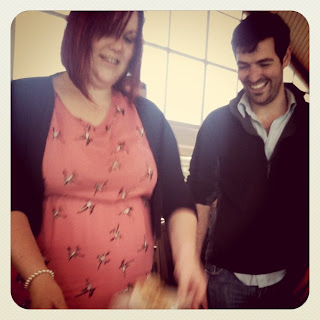 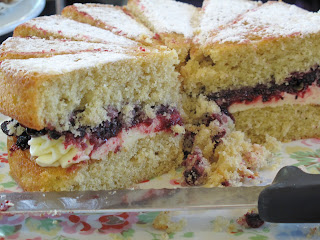 After myself and Beryl had finished shooting our separate parts for the feature, we all joined the film crew and our families for lunch in the Tea Room to dig into my cakes and enjoy a pot of tea of two with a good old chat about our favourite subject. It was so much fun and it was so nice to finally visit Woburn Abbey in such special circumstances, I’m one very lucky girly.
Alistair did have a very tiny nibble on the Giggle Cake, as did the rest of the crew after such hype (which I think lived up to that with them : ) as he was on a healthy diet and was tucking into a potato and salad whilst we were all much naughtier. 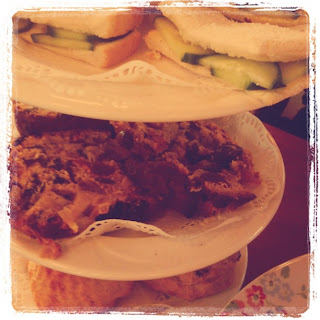 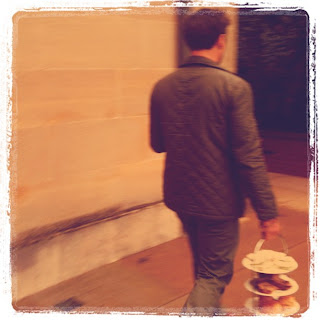 I learnt a heck of a lot from Beryl on the Etiquette of Afternoon Tea, of which I was able to impart some of onto my lovely friend, William Hanson at our own Etiquette event a few weeks back. She is a very talented lady and is author to various books on the subject, so do look her up.
The tips and history that I learnt will be blogged at a later date, as it’s a blog post in itself. 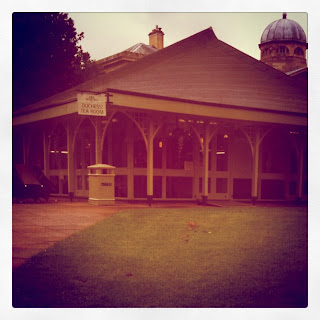 And thank you very much to Mark and Amy for inviting me along to join Alistair and allowing me to not bore you all (too much ; )
If you missed the feature on Afternoon Tea at Woburn Abbey, you can catch it on the BBC iPlayer for a few more days, Series 13, *Bedfordshire* – 36 minutes in approx. And I will also be gaining a copy to upload onto my website very shortly, so I can watch myself back as much as I psychotically want to ; ) 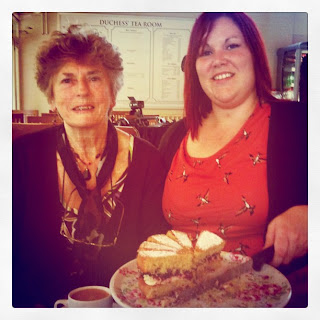 Miss Sue Flay
X
If interested, full photo album from the day of the filming here, where you can also *Like* my page. 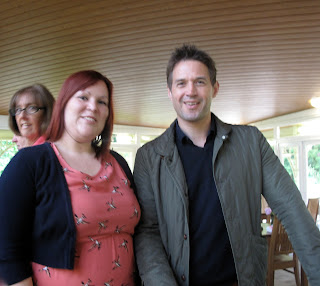 My TV appearance on BBC One’s Escape to the Country… Should you have missed it ; )
http://www.youtube.com/watch?v=4sTFzV3LWUw&feature=youtu.be
4 Comments