How To Throw A Themed Tea Party: A TARANTINO PARTY / "CAKETIN TARANTINO"

How to host a Tarantino themed tea party 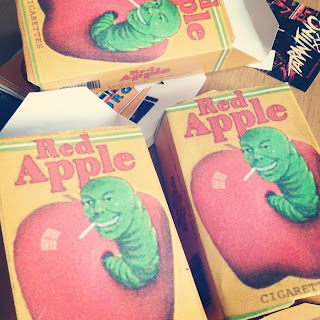 As you may or may not know, I have a HUGE crush on the warped and twisted mind of Quentin Tarantino. I have been in love with him years before I should have been, thanks to my lovely mother introducing me to my first horror film (Wes Craven’s “Scream”) at a much younger age than I should have been watching said films, but credit to her, she wanted me to watch them in a controlled home environment and be there to cover my eyes should I need it… love you mum!

However, it turns out I was a fearless young lady from a young age and I became addicted to the genre very quickly, but Tarantino caught my eye with his saucy vampire flick, “From Dusk ’til Dawn” and I immediately fell in love not only with his very own (and later on, rare) screen presence, but also with his clever, awe-inspiring mind. I could waffle all day about my love of his films, that every time you watch one of his titles, you learn or see something new and gain just a little more respect as you do. 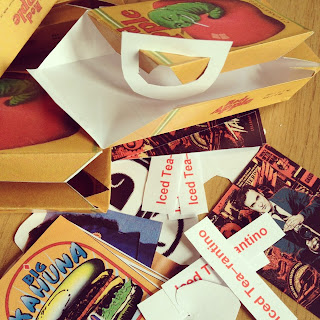 If Quentin Tarantino ever needed to meet a clever woman, with a strong mind, honest opinion and a love of baking (and fellow foot fetishist!)… he would find that Miss Sue Flay was his match made in heaven. Ahem.

I am about to re-brand into a more “prim & proper” version of myself, teaching afternoon tea baking in your own home (QT, call me if you need to learn my amazing Tuck Shop Cake recipe ; )
as well as teaching traditionally “British” Afternoon Tea etiquette lessons to tourists and students of Cambridge.

But, deep down, I’m a wannabe gun-toting, violent film loving girl with a love of following my own mind and doing something about it…. including hosting a Tarantino inspired party, complete with food & drink related to my favourite films and elements of Mr Tarantino’s movies. I just hope if Quentin is reading this, that he doesn’t hate it… I’m not American, so my party wasn’t a huge rave of an affair… it was very civilised, in my home, with some fellow tea & cake loving Brits who wanted to sit in my lounge and choose a QT film whilst we nibbled. 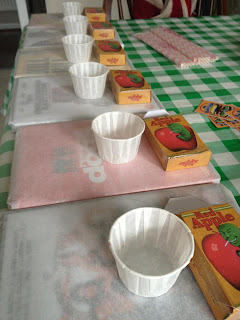 There are so many ideas dotted around the internet on food related to Tarantino films, but no real “How to Host a Tarantino Themed Party” sites… so here is my very own how to guide on this theme… I just hope you all like it as much as my lovely friends did for this evening!

These are simply my thoughts and sorcery on how to do this, but make it your own – go wild with your own favourite QT films… why not even throw some Eli Roth related love into the mix too?… A “Hostel” style dinner party could make for an interesting evening if your guests are not of weak disposition! 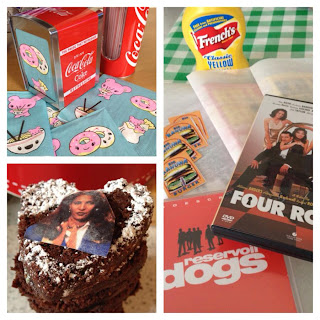 How to host a Tarantino themed tea party

Firstly.. get in the mood and have so much fun watching Mr Tarantino’s extensive library of films and get creating your own playlist. I use spotify religiously now, which is fantastic for playlists for absolutely everything, Tarantino themed music included.
I took out the tracks that didn’t do it for me, added a few of my own favourites that I knew were missing and used it to listen to as I baked and prepared my menu, it really helped to get me excited and ready for my guests.
I also ensured this was playing when they arrived, with a few film quotes kept in for giggles!

We settled on “Pulp Fiction” to watch as we ate… it’s been a few years since any of us had seen this, so we geeked out, as I bobbed in and out with my Tarantino inspired menu, made and baked freshly in my kitchen. It was a superb way to spend an evening with friends.

I also added my Gramophone to the hallway so that when my guests arrived, they were greeted with some haunting music to reflect some of the films where Quentin has done this, my little ode to his love of vinyl. 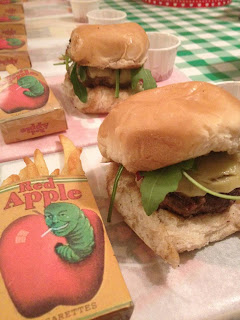 With French’s Classic Yellow mustard & ketchup in little disposable pots for the french fries served in my Red Apple Cigarettes cases (a fictional cigarette brand used in many of Tarantino’s films), made from a template found through good old Google!
Served on a platter made of a Tarantino DVD wrapped up (well!) in wax paper for a real geeky serving effect.
The burgers were simply made with ground minced steak, seasoned well then grilled, served on a brioche bun with salad and Monterey Jack cheese. 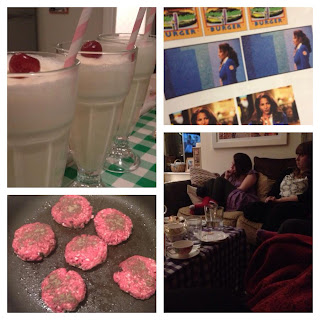 My welcome drink was a scarily light, but huge glass full of vanilla milkshake, topped with a cherry as an ode to Uma Thurman and that famous “Pulp Fiction” scene.
If John Travolta’s character had been there himself, he too would have said that it was a “pretty effing good milkshake” ; )
Complete with a white & pink striped straw for a slightly “American Diner”
feel to proceedings.

For each milkshake glass, of which I found on Ebay at a good price, you blend 4 scoops of good quality vanilla ice cream with a splash of whole milk (depending on how thick you want it) and top with a glace cherry. 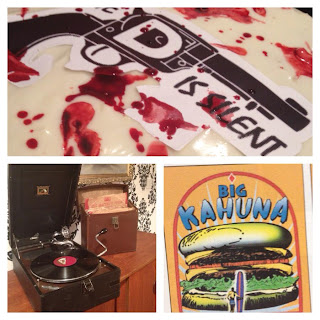 Again, I wanted an “American Diner” feel to my table, so filled a Coca Cola Napkin dispenser and it was placed with a straw holder in the middle of my table – it actually looked a little odd mixed in with my vintage china, but sod it!

A White Cake, made to honour the latest of the QT series, “Django Unchained” with “The D Is Silent” scrawled across it with a gun and blood spatter… there couldn’t be a Tarantino-inspired party without a blood soaked cake! 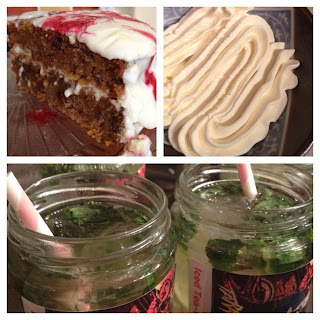 Actually went for a Mojito instead of Iced Tea, with a non alcoholic option for any drivers on the night… I was going to make a frozen margarita as an ode to Budd from “Kill Bill 2” & his jam jar cocktails before his epic death scene, however it’s not my fave cocktail, so I bowed out and made mine with mint freshly picked from my own herb garden. 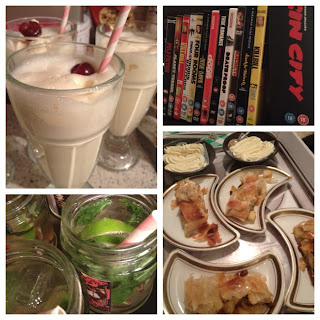 My favourite Quentin Tarantino film is in fact “Inglourious Basterds” and I couldn’t let this menu go without the drool-inducing Apple Strudel of which you get many close ups of as Shosanna is being grilled unexpectedly by Col. Hans Landa. Not only is this one of the most tea cup gripping scenes in the entire Tarantino back catalogue, but the cream beaing scooped on top is one of those images that gets me craving it every time I see it.
As it was a cold winter evening, a spiced apple Strudel went down extremely well, with the added sultanas being soaked in orange juice made it the perfect end to a tasty menu. 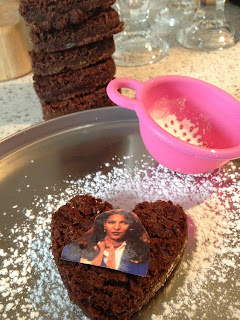 8) Jackie Brownies
Made with a gooey chocolate brownie recipe, but with added M&M’s for a crunchy base underneath, it was an experiment that worked quite well for something a little different… the colours were meant to represent the “Mr” colours from “Reservoir Dogs” ; )
I cut out the lovely Pam Grier shape out and dusted over each brownie with icing sugar.
Packaged up to take home, as way too much food for my guests to eat in one go. One guest even had hers for breakfast the very next day, ultimate cake lover right there! 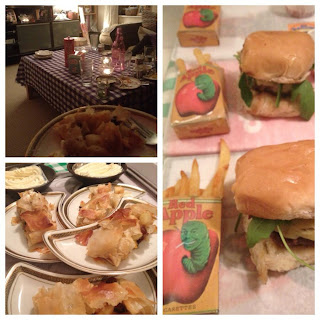 8) Sleep like you are in one of the “Four Rooms”

Actually, scrap that, as I don’t think you could fall asleep in one of his trippy rooms… but enjoy a well deserved rest afterwards and the devastation your fellow Tarantino fans have left behind afterwards.

Are you a big Tarantino fan too?

What would or have you served at your own QT inspired party?


You can see the full photo album for this event here. 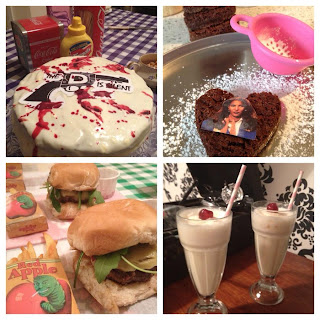 If you enjoyed this how to guide, why not take a look at my other party ideas?:

How to host a “Jubilee” themed tea party – Click here.

How to make the perfect cucumber sandwich – Click here.

The not so glamourous side of being an Afternoon Tea Hostess – Click here.