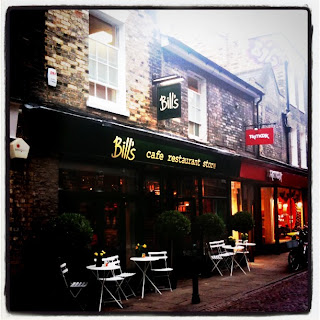 After an afternoon of wondering if there was anywhere in Cambridge that offers Afternoon Tea… Scones and Jam in particular… after 6pm on a Wednesday night, I remembered that some of my fellow Cambridge bloggers had recently been mentioning and liking the new cafe that has recently moved into the empty space where the old Slug and Lettuce pub used to be. 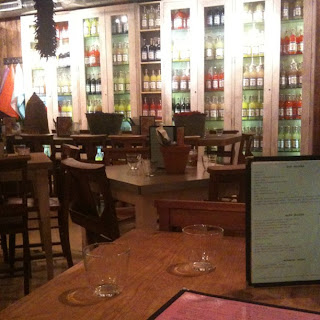 So onto the internet to look up Bill’s Cafe on Green Street, I found, much to my delight, that they do indeed offer such sweet delights after 6pm. Hurray!
And with my fabulous friend, Amy, I headed down there for some gossip and man-free time away from the stresses of work, family and animals jumping all over us (The usual scenario whoevers house we usually go to catch up in hehe : ) 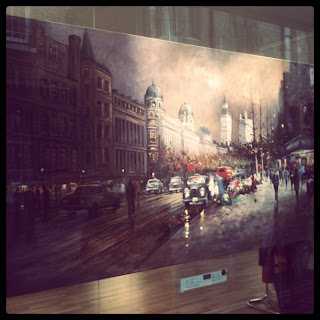 Walking down Bridge Street and onto Green Street is one of my very favourite parts of Cambridge to walk in and it always relaxes me, as it is less touristy around here, especially on a week night. I managed to spot a new and rather impressive painting by mine and Mister Flays’ favourite Artist (Henderson Cisz) in the window of a local gallery on my walk down here. I couldn’t help but take a cheeky snap and wish I had the £12,000 to buy this beautiful original… A girl can dream! 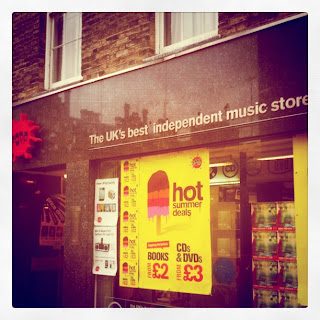 If the evening walk had to be made any better, the only thing that can do that is a quick visit to Fopp, although now taken over by HMV, I still like to think it is a great little music and film treasure trove, and I managed to come out owning the entire back catalogue of “Mad Men” on DVD and a random CD story book written and spoken by Nick Cave of The Bad Seeds.
I love this shop. 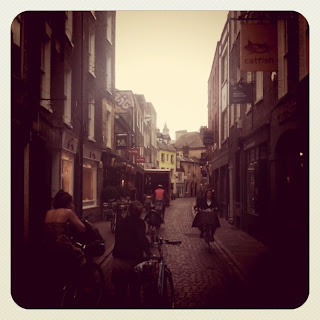 On arrival at Bill’s Cafe, I was greeted with an almost too-cheerful-to-be-real welcome…although I think that is a little unfair on them, as they weren’t rude, and that would be the first thing I would have jumped on if they had been. Perhaps the little Grinch in me was playing up today, I’m not sure.
But they were all just a little too helpful – In the first 15 minutes of being sat at the table waiting for my friend, I was asked if I wanted to order a drink FOUR times, by FOUR different staff members…. The first person to ask me this was already off making me one ; )
I had ordered a Pink Lemonade & Vanilla Ice Cream Float, which came with a whole strawberry on the edge of the glass which made it look very pretty. Not bad, if a little pricey if I had to pick. 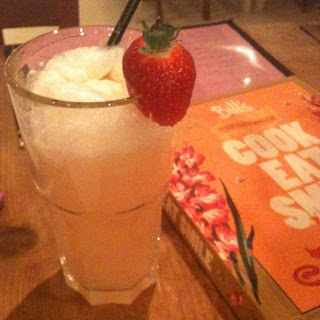 I have never had an Ice Cream Float in my life, and the flavour wasn’t really much to write home about, but I had read the same day on another bloggers post in a London tea shop that they had ordered a coke float and the waitress told her that it would explode as soon as she stirred the ice cream with her straw…. I had to give it a go… And it was more of a fizzle than an explosion, but child-inducing all the same. Hehe – Simple things. 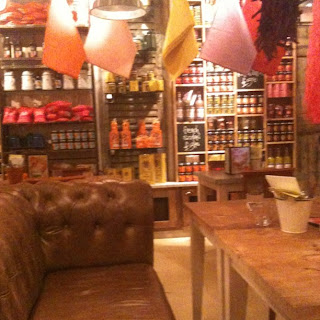 The girl who had seated me was also very helpful when I asked if they had Wifi here. I was purely asking for future knowledge, however off she went for the code and she came back and wrote it down for me. Thanksfully in fact, as I didn’t have a signal in there to tweet or email…shock horror!…so it actually came in very useful.
Chatting to one of the many helpful and bored looking waiters as he wandered past a second time to ask if everything was ok…. Yes, yes, fine, fine… I did ask him if they were on Twitter, to which he replied no.
GASP!
So I gave him a geeky lecture on how I think they should be so that we can all link them when we are sat here thinking of blog posts and taking a million photos of our food and drink instead of actually eating it – Come on, I can see you hanging your head in shame yet agreement here! 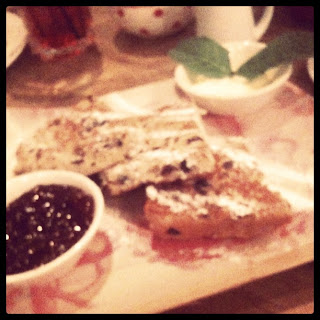 When it came to ordering food, Amy had the Fish Finger Sandwich and it looked pretty darn good after I had turned down the savoury option, and instead going for the Warm Scones with Bill’s Strawberry Jam and Clotted Cream – The entire reason we popped in, so thought it rude not to give them a go.
At just £3.95 for this, I was expecting to perhaps get a couple of disappointing miniature scones with a teaspoon of each of the trimmings, however I was presented with a large wooden board with what actually looked like 3 huge slices of fruit bread with a big bowl of jam and a second of the cream. They were indeed warm (Not scones how I had imagined) and already buttery and they were just delicious. The only thing I could fault was that the jam was a little tart for my liking, but I’m becoming a bit of a Cream Tea snob even though I had promised myself I wouldn’t, so I have standards all of a sudden.
It wasn’t a huge problem, lets put it that way, I devoured the lot.
And I LOVED their teapot…a  cute tin pot with a lovely pouring spout… It was a dream to pour the tea from. I really wanted to buy one, but couldn’t see them on sale if they are. Shame. 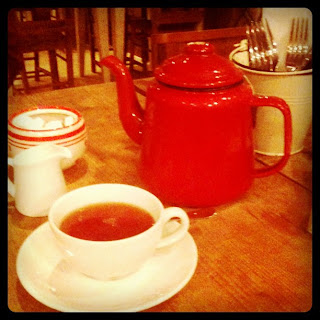 And the last point that I will mention, is the music. An important part to my own tea parties.
The background music was relaxing, tastefully mixed up and right up my street.
I heard my new favourite singer a couple of times, Caro Emerald. As well as some Nina Simone to add to the mix. A brilliant soundtrack and a really relaxed atmosphere. Even if it were busy in here, I am not sure you would notice. It’s a great place and I will be back soon with Mister Flay to try out their burgers, as they looked pretty darn good.
MSF
x
10 Comments