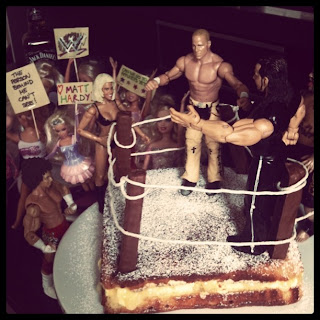 Back in May, I entered myself into a competition called “Sugar Slam 2011 – Whisks Of Fury” which had immediately caught my attention through Twitter as a baking competition with my kind of twist to proceedings.
It is a wrestling themed online bake off, hosted by Bake And Destroy, with guest judges such as the legendary Mike Edison, Ben Roche and the inspiring Beth Phoenix… If you are into your wrestling, you will know they are all fricking awesome and it was just so much fun reading about this competition, let alone cooking up ideas on how to actually enter it from the UK!
My entry is now in and needs the people’s vote … so PLEASE DO VOTE FOR ME HERE : )
(Just look for my piccies as on my post here… You can’t miss it! : )

I don’t know huge amounts about wrestling, but I used to LOVE the MTV cartoon “Celebrity Death Match” and equally loved playing the play station games too.
It helped relieve some of that pent up teenage anger inside of me and now I can release that anger through the medium of baking… Much more constructive I would say. 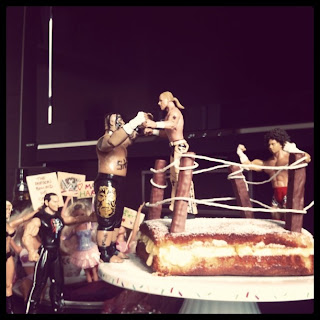 So why did I enter? Well. A little while ago I met up for a cuppa and a chat with the lovely Claire Young who runs School Speakers and Girls Out Loud, as well as being more well known for coming second in line for the title of “The Apprentice” with Sir Alan Sugar in 2008. I remember Claire inspiring me at that time, showing how head strong women in business can be and I admired her for giving her all in all those scary tasks. Then last year I got chatting to her through Twitter… I have no idea how… I think it was our mutual love for @fancie and her lovely cupcakes, which got us chatting about tea and cake… Naturally.
I mentioned that if she was ever down this way, we should meet up for a cup of tea… so we did just that. 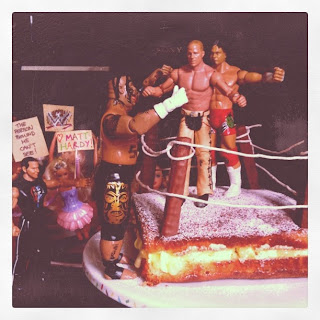 A couple of months ago Claire was hosting a local awards ceremony at Chilford Hall and I was invited down during her run through and she offered me half an hour of her time to chat about my business, her business, business ideas in general and her thoughts on my plans for the future of The Secluded Tea Party.
Claire made sense, she knew what she was talking about and made me realise that I wasn’t chasing a silly idea. I am very thankful to her for the honesty and her suggestions, including the idea of entering baking competitions  and draws to win some awards and titles and push forward my ideas with these under my belt.

So this is the first baking competition of many to be entering this year I hope. And what fun it has been – Thank you Claire for the push! 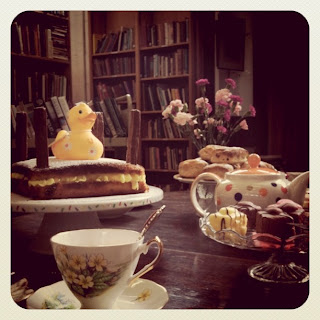 It took me a while to think about how to execute this entry, and it finally came to me… And it looked perfect in my head. However, did not quite come out the way I had hoped for in the baking. Never mind.
It kept me out of trouble for a few hours and I even got a funny double use for the cake itself that day…. After running my living room-based wrestling photo shoot in the morning, I then stuck a rubber duck in the middle of my creation (In the vain hope it would hide the big holes on the top!) for a photo shoot with the Cambridgeshire Journal later that afternoon. Not my proudest cake moment. Oops.

My entry was sent for judging via email and I told them that I was very keen to get my floury mitts on the Sugar Slam World Championship Belt and I wanted to prove that even us conservative, 50’s housewife types can get respect in their manly world! I mean, what man doesn’t enjoy cake baked for them by a lovely lady?!
I don’t believe for a minute that all WWE wrestlers are beer guzzling, steak eating burger men folk. Oh no. I believe that deep down, each and every one of these guys are gentlemen… Deep deep down, most just don’t openly admit it.

I entered a lemon sponge layer cake with a home made lemon curd and butter cream filling, calling this masterpiece “When (WWE) Life Hands You Lemons…”
It is a delightful concoction that works very well with a cup of rose infused Assam tea, the perfect calm-me-down after a sweaty session in the ring! (Of which is also portrayed in my photos on the very top of my sponge, using Cadbury’s milk chocolate “Twirl” fingers for the posts. 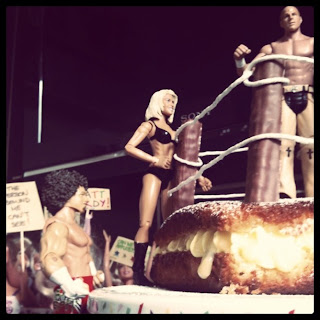 Please also note my barbie fans and their placards, made by my own fair hands. This took a lot of work to pose them for the shoot, especially trying to get the little cocktail sticks to stay in place. This took dedication and a lot of tongue poking out of the side of my mouth action hehe.

It provided me with hours of joy… Erm… I mean Blood, Sweat and Tears ; )

And a HUGE thank you to Louis, my new little friend, for lending me his fantastic wrestling figurines and taking some of the finished product away to eat so it didn’t go on my hips! And also to Bethan and Megan for lending me their fabulous Barbies to pose as my cheering fans and also taking some cake off my hands. 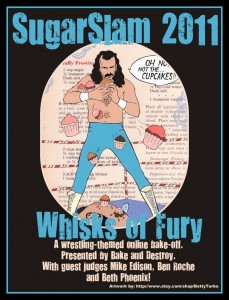 So now I sit and wait for the results of this years’ Sugar Slam 2011 winner and I am just hoping that my fun and very British creation is in with a chance. Do keep everything crossed for me and hope that they overlook the poor old squashed edges after the wrestler trampling the poor cake got during the shoot!
Don’t forget to go and vote for me…Please do help me if you can!