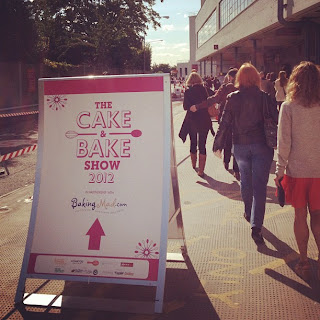 This weekend I headed down to the much anticipated Cake & Bake show at Earls Court in London and I was so excited to be rubbing shoulders with Twitter and Blog friends who I haven’t yet met face to face during my last couple of cake-induced years online. I met the team from Great Cake Places, 2 Chicks Egg Whites and the lovely Abigail and her partner from The Cake Nest and I managed to buy myself a gorgeous box of their cake balls, which were worth the breakout from my weight watching routine hehe. For this reason alone, it was worth going to the very first Cake & Bake show to meet those people, as well as bumping into a few familiar faces too. I hadn’t realised my lovely friend, Lynn Hill of the Clandestine Cake Club was going to be there, so to see her was fab and I loved that she was wearing her CCC badge to help her recruit new members for her fabulous free international cake-sharing club hehe. I loved that idea and this recruiting tactic worked well for her which is even better news – don’t forget I host the Cambridge group and plans are currently in motion for the next CCCC meet in October : ) 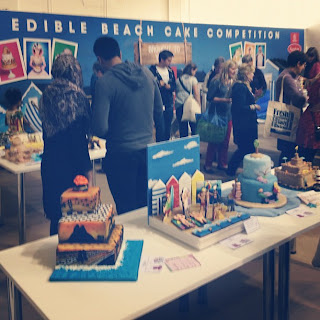 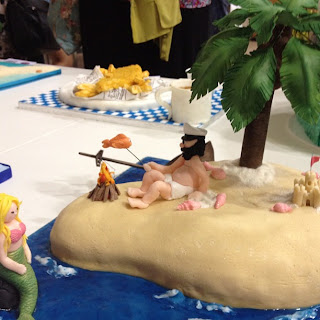 The edible beach competition, organised by Miss Cakehead and BBC Radio One DJ, Daniel P. Carter was great fun to look around, with a mix of cake entries from both amateur bakers and professional cake makers. They were all massively impressive works of art, especially the fish and chip entry (Complete with a cup of coffee and a pot of *Mushy peas*, which did in fact win a prize and we thought was well deserved. There are certainly some creative cake makers out there and Miss Cakehead does a blinding job of bringing this out of people, this was the highlight of the things to see at this event. 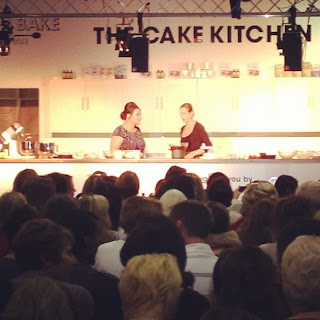 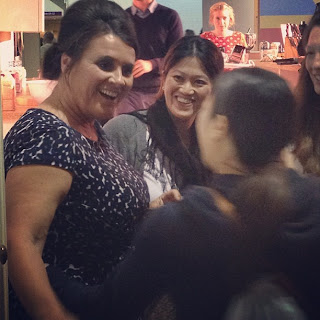 There was also a good line up of high profile bakers, with the very pretty looking and informative  website giving information of their talks and their pre-bookable demos and classes prior to the event. Speakers included Paul Hollywood, Mary Berry, Peggy Porschen, Eric Lanlard, Mich Turner and Paul A Young. However, on the day, listening to these talks, you could hear the lovely presenter (Alistair Appleton of Escape to the Country, who I have recently done some filming with for a local feature) more than you could hear some of the bakers. Jo Wheatley (Great British Bake Off Series 2 winner) for example, bless her, she is quietly spoken anyway, but you couldn’t hear a word she was saying above the sound of the kitchen equipment. We had to give up trying to listen in the end, which was a little gutting as I love her and her book to bits, equally. 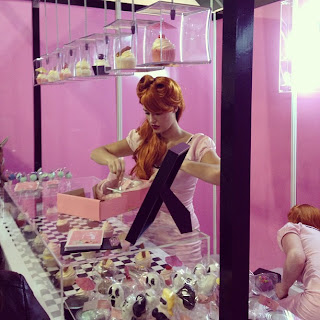 As exciting as this first event was for the organisers of this event, I did feel that they got a few things wrong and it seems there is a similar feeling with most people I have chatted about it since Saturday, which is a genuine shame, as it could have been amazing. Instead, it was fairly chaotic for want of a better word.
We were charged £12 per person for entry and then once in, we were then to be charged another £3 for a map of the badly organised stands and stages. I have been to many food events before and as a general rule, a small map included in the price is standard practice. There was no order to the event, just a free for all.
I had already spent £24 on 2 tickets, which gained me nothing other than entry, so I wasn’t going to pay for the map on top. We made our own way around the stalls and stands, noting that there were ridiculously lengthy queues for toilets and the one or two eateries throughout. Some people were queuing for nearly an hour for a bottle of water to take away in this hot room… Not impressive and noted for future, take your own with you! The lighting was terrible. 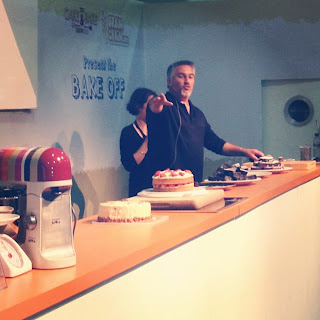 I felt stupidly sorry for a lovely lady who had designed 5 or 6 gorgeous dessert buffet tables along different themes and they were beyond stunning to look at for an afternoon tea freak like me. However. The poor woman had been placed in a dark, dark corner of the venue, with no overhead lighting and you could hardly see the tables from the rope they were behind. I must have heard at least 6 people mention this to her whilst I was stood there for 3 minutes or so and this was at midday on the first day, she sounded so gutted. I was rather angry for her, this was poor.
In fact, a fair few of my own photos didn’t come out due to very low lighting too, so not many cake pics to show you I’m afraid! The Cake and Bake Show also insinuated to me that there would be a really good selection of stands and events, not just cakes as such, there was the Real Bread Campaign, again great to meet a Twitter personality, but this really and truly was the “cupcake show”.
I couldn’t tell you how many cupcakes there were and as some of you may know, I don’t have the fondness for cupcakes that I once used to (Yes, I have an entire foot tattooed with an ode to the cupcake – oops ; ) I do admire the odd cupcake (done well), but for the most part, these were not great and I wasn’t paying more than Harrods prices to gain a fluffy piece of cake. 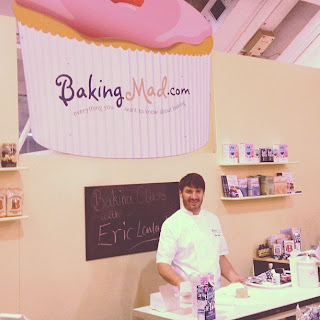 There were no afternoon tea treats, scones, layer cakes, tarts, petit fours, etc. I am not saying this is the organisers fault, as they would have taken the stalls that came to them, I’m sure. It just goes to show how unimaginative baking business seems to be out there at the mo, which is a real shame. I don’t know for sure how much a stand cost, so it could well be that it was extortionate and not worth it for some baking businesses, so I would understand if that was the case. I would be very interested to find this out.
The event was also sponsored by the likes of Kenwood… but where were they? There was no stand, which would have been nice to have a nosey and drool over their products. That was also a little disappointing, but never mind… we will live hehe.
Don’t get me wrong, I bought a few bits and bobs from the cake decorating and supply stands, I had my cake balls to take home to enjoy later on with a cuppa in bed (naughty, but oh so nice) and I managed to get some cakey networking under my hat, so I was pleased with my little lot. 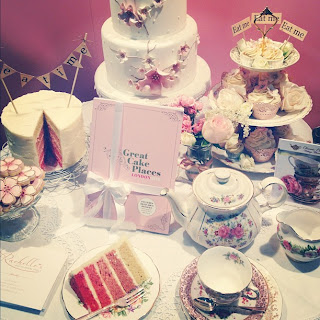 It just seems that there was a lot of deflated faces at the event, even walking out after an hour and a half (Yup, there wasn’t enough to make me want to stay longer) there was no buzz, no happy faces, it felt like we were walking out of a funeral and I remember commenting on that before I had even thought about writing this blog post.
It was a really weird atmosphere, not what I had expected at all.
I am truly hoping that the Cake and Bake show that returns in Spring 2013 in Manchester will take their guests feedback on board and make the second one a huge rip roaring success, as the idea is fabulous and the guest speakers gave it the energy it truly needed. Fingers crossed for new and existing faces to help bring this back next year and make it a lot better… It was their first event, so I can’t be TOO picky ; ) 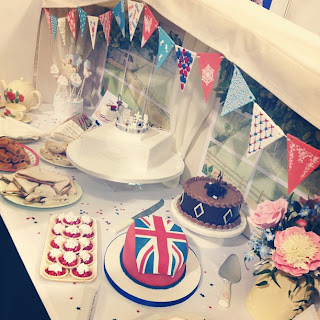 Highlight of the event for me… The Sugar Craft Guild and their IMPRESSIVE afternoon tea table made entirely of sugar… finger sandwiches, sausage rolls, strawberry tartlets, a complete tea set, flowers, bunting, cakes, napkins, the lot. It was amazing and I loved chatting to the team about this fascinating and sugary feature.
Also, the plus side of leaving earlier than planned meant that I got to enjoy a well deserved trip into deepest, darkest London, which is rare these days. I ended up wondering around Shoreditch and finding a fantastic burger place called Byrons (complete with thick American-style milkshakes – the best I’ve ever had I think!) 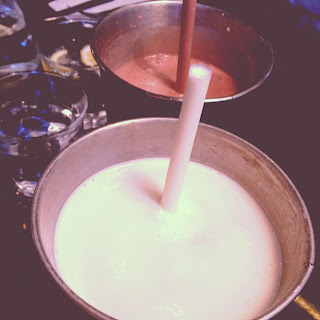 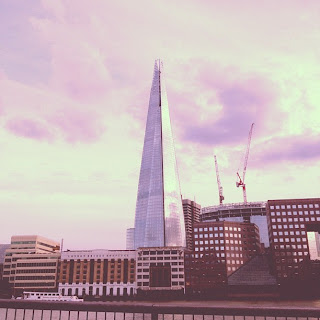 And enjoying a tea stop later that day, seeing as we had eaten NO cake at The Cake & Bake show, at Ellas Bakehouse in Covent Garden for a cheaper slice of cake (My fave pitstop in that area), ending the day with a walk along the South Bank for a couple of hours to walk off all the food afterwards, noting a hilarious group of (not so) civilised hen party goers running around dressed as DIsney characters hehe. It was a very relaxed day all in all, making me glad I escaped Cambridge for the day, even if the main event was a little disappointing personally. 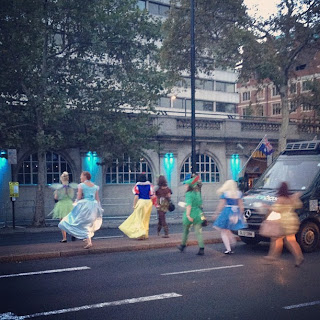 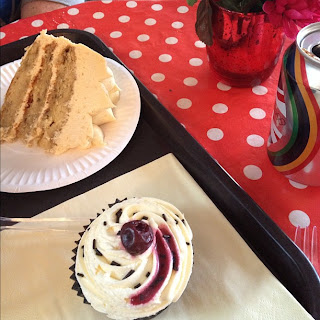 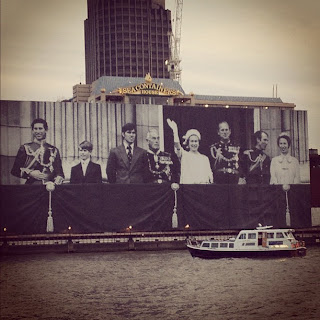