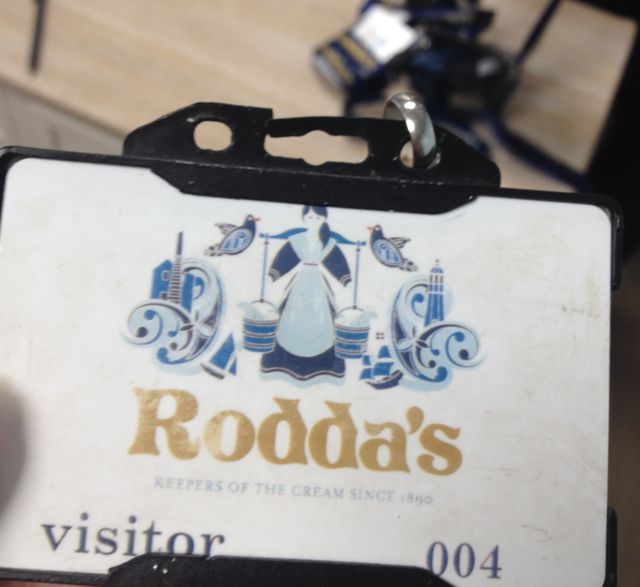 As true Brits, we all know and love this Cornish brand when it comes to topping our scones at afternoon tea. In fact, we love it so much that we get into deep conversations and even debates over how we should eat it. It’s a truly important topic when it comes to enjoying afternoon tea and Rodda’s is the crowning glory when done right.

I’ve always used Rodda’s for my own afternoon tea events & spreads, they’ve never bribed or endorsed me to do so, it’s just the “right” way when it comes to the trusty cream tea… In my humble opinion!

Well, just imagine my sheer excitement when the lovely team at Rodda’s HQ invited me to join them for a VIP day whilst visiting Cornwall for national Afternoon Tea Week back in August. 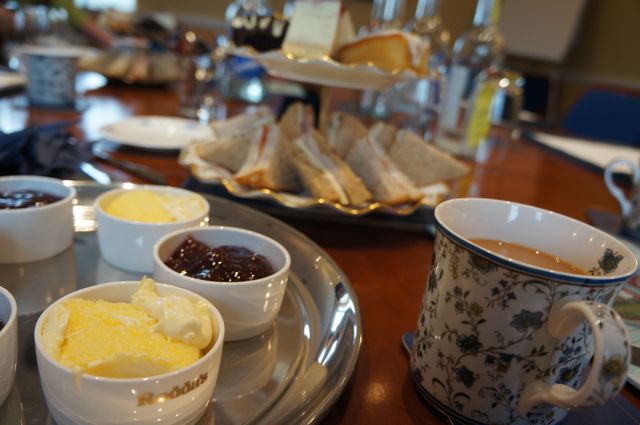 This was a “money-can’t-buy” experience, as the Rodda’s office and creamery is not on offer to the general public, so this was a very special invitation indeed. The only other person to have the Cornish red carpet rolled out for them to summer had been the Prime Minister…. I felt super special next to such a name on the guest list.

I honestly didn’t need asking twice, I was a little nervous about the idea, as I would be with a small crowd whilst visiting Cornwall, my gorgeous bearded manfriend, his sister and his two energetic nieces and a nephew (and we had a lot plotted out on our limited itinerary!)…. How would this even work?

Well, I can tell you, the Rodda’s team well & truly rolled out the red carpet for us, I am still in shock at the amazing hospitality they offered us all for the day of our visit, we were treated like afternoon tea royalty…with superb, twinkly, jingly bells on!

Everything we did was a real first for Rodda’s, as they don’t usually open their HQ for tours or visitors, so this was one truly special day, none of us will ever forget it. 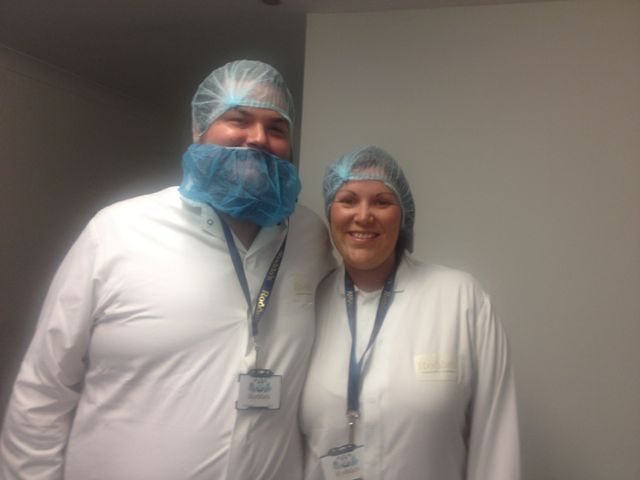 Whilst Philip and myself were shown around the Rodda’s Creamery, the others were joined by Mr Nicholas Rodda (yes, this is a family run business, through and through – four generations of the Rodda family wander around and work under these roofs, it’s fantastic to see).

Mr Rodda supplied the children with delicious treats, gave them a mini tour of their offices and read the official Rodda’s story book to them to keep them entertained. This really was a money-can’t-buy experience, they were even joined by the main character from the story, “Merrion the cat burglar” hehe… The kids had a whale of a time, almost as much fun as we did as adults!

We all received a special signed copy of this beautifully drawn and written book from Mr Rodda and the kids are enjoying reading it even now, I think this has created special memories for three very lucky little people – they’ll be telling their friends for many years to come, as will we! 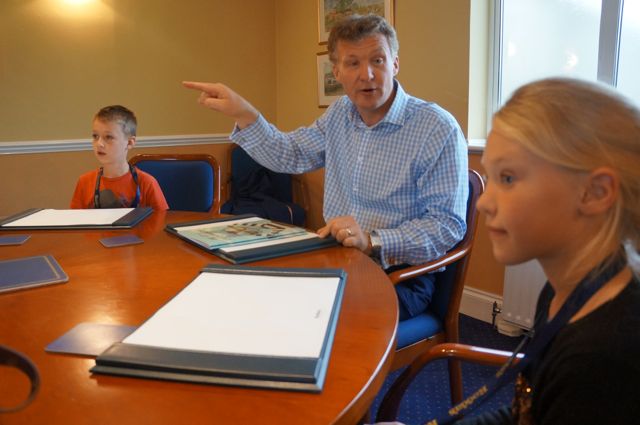 So, What Exactly Is Clotted Cream?:

It’s thick cream made by cooking/heating milk very slowly and then allowing it to cool, whilst the cream content rises to the top in coagulated lumps – this is how the thick “skin” forms on the top.

When it comes to authenticity for the consumer, Rodda’s ensure their customers know they’re buying the real thing by having a “PDO” for their “Cornish Clotted Cream”. This stands for Protected Designation of Origin, an award given by the European Commission, designed to protect traditional, regional foods against imitation. If you see the words ‘Cornish clotted cream’ on a label, you can be sure that the product inside has been made from the distinctive local milk used for this top-notch product. 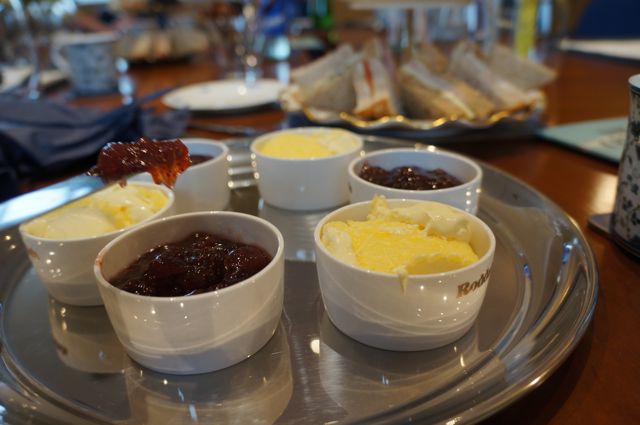 Most of this tour is completely off limits to you, my dear reader – I’m very sorry, but my lips are sealed as to how their Cornish Clotted cream is baked. We had to swear on our cream teas’ life that we would divulge the secrets behind how their clotted cream is baked, so you’ll have to take my word for it when I say the entire process is mightily impressive.

I feel as though this video below might be a better way to show you what we saw, this is very special, not many people get to see this, so you’re very special too now to have a sneaky peek into their world – enjoy!

In 1890, Eliza Jane – Nicholas’ great great grandmother – provided clotted cream from her Cornish range to her family, using a way she had devised to keep it fresh from her aga. Young Willie Rodda went up to London at the age of 16 to share the cream and orders soon came in fast… their business was born.

The cream would go up on the local train and British Rail would take it out at the other end to distribute into London hotels or Tearooms – how distribution has changed over the past 120+ years! 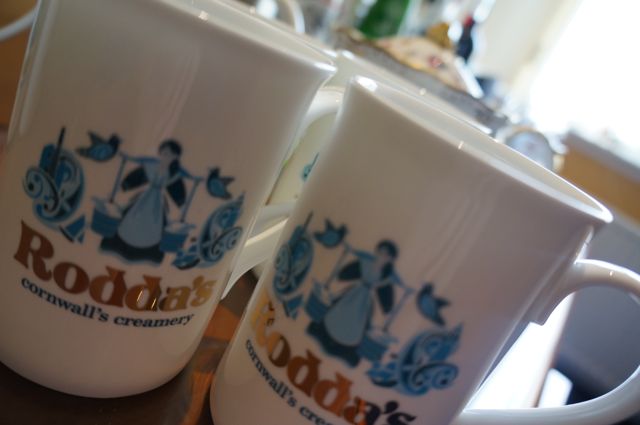 Read more about their family history here if you want to find out more later on.

What Else Can You Do With Rodda’s Clotted Cream?:

So, what else can you do with clotted cream, other than dollop it generously on top of your warm, freshly baked fruit scones? Here’s just a few ideas, you can actually use it just as you would double cream, so you can get fairly creative for a richness to many dishes, add it to:

Victoria sponge (or any cake!) 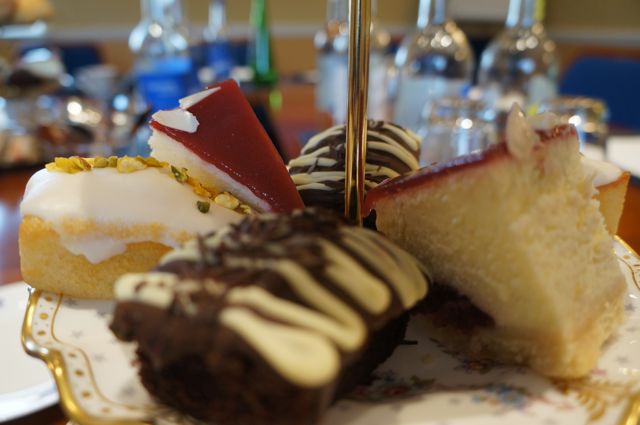 Even topped on cornflakes, just like Eric Rodda’s himself enjoys every day for breakfast!

In fact, Rodda’s have a mini booklet titled “101 uses and excuses for clotted cream”, so it certainly isn’t just perfect to top off your scones – who would have thought it?!

You could even do as some Cornish pasty makers do, adding a dollop of clotted cream to the inside instead of butter for moisture and richness to to classic savoury treat. 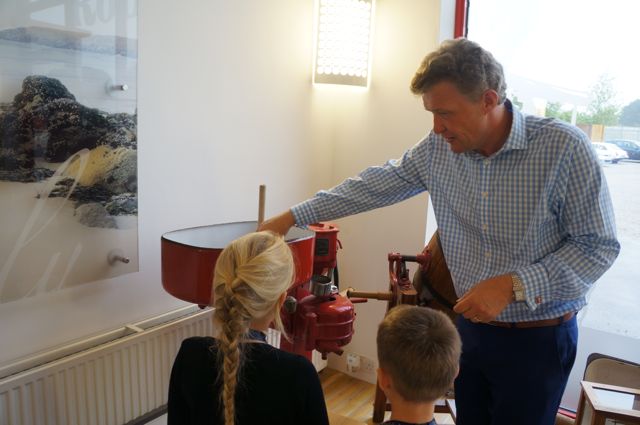 Rodda’s even produce small batches of salted butter (with the most beautiful pattern adorning it you ever did see) following a Royal request from Her Majesty The Queen. Being a fan of their clotted cream (Prince Charles sends it to her and Philip sends it to his friends at Christmas I’ll have you know) Her Majesty requested if they might make them some butter. So to this day, at this most Royal request, one man stands in a room churning their butter, decorating and and wrapping with his own two hands – just fantastic. 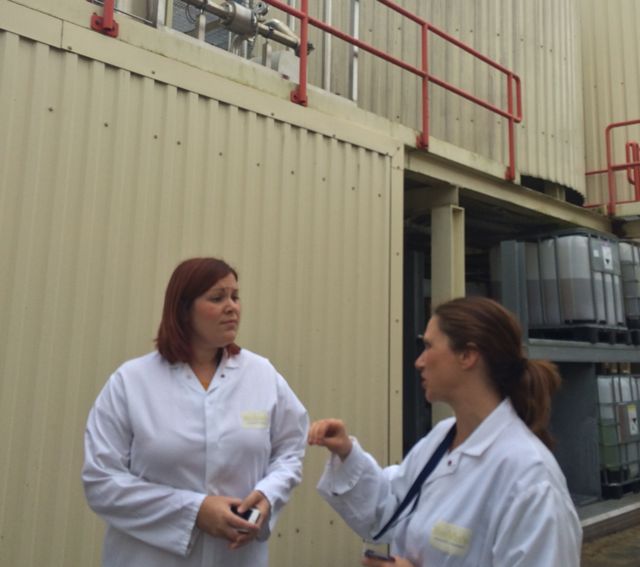 The creamery holds 150,000 litres of Red Tractor Assured milk in silos on site, with each silo holding up to 20,000 litres. As this milk comes in from local dairy farmer within 30 miles, across 151 farms, it is tested (much like a pregnancy test) for quality and if it is unwanted for the cream, it goes off to local cheese makers so as not to waste it.

That’s a heck of a lot of milk! We asked ourselves what would happen if they ever burst…. Cornwall would be boogey boarding in milk rivers up and down the county!

Cornwall is great for growing grass, so the cows are happy and able to graze for up to 10 months of the year (weather permitting!). The Cornish pastures are green and lush – this can be seen in the great quality of milk that they produce – and no milk is mixed to ensure a consistent batch every time it’s used. 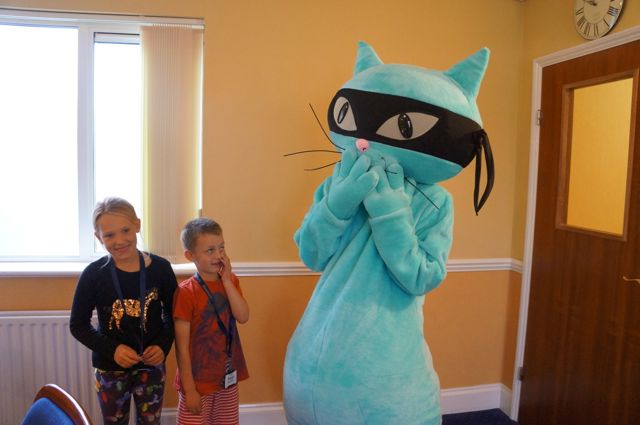 90% of production at Rodda’s is clotted cream.

5 years ago Rodda’s started bottling their own milk – now sold to local hotels and tea rooms as well as served freely within their staff rooms – I was almost tempted to half inch a pint myself, there were fridges full of it for the taking, ahem!

Rodda’s started with glass jars to store and supply their clotted cream, then tins and then the plastic containers we know and love today. 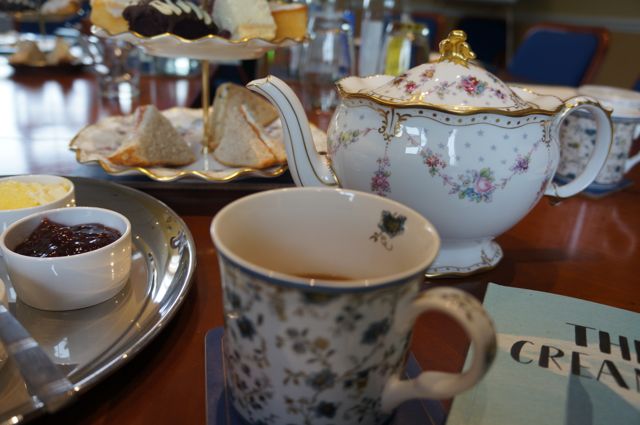 Their clotted cream is poured into and baked in the plastic containers we buy in shops and supermarkets today. After much experimentation, they found a material that would withstand the heat of their ovens and, to save work, they found a perfect solution for baking and distributing.

The clotted cream is produced in small batches – even the catering tubs are fairly small to ensure quality in every hand-checked batch. 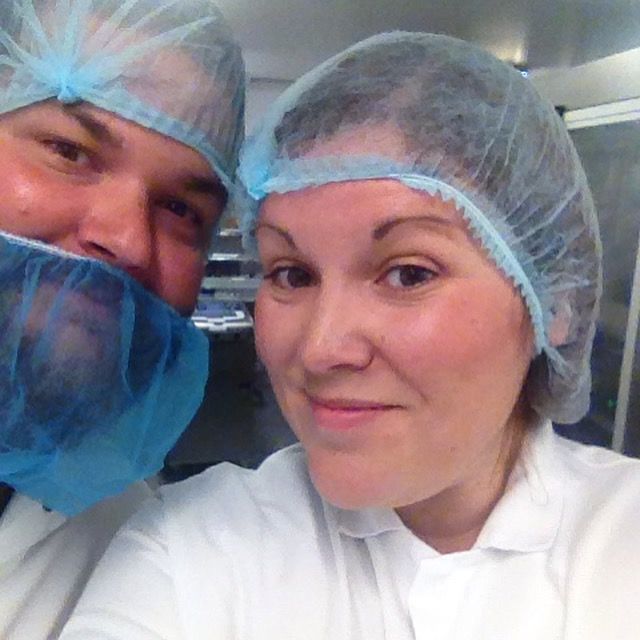 After the clotted cream has been cooked, it cools in refrigerators overnight and goes out the very next day – it’s usually on the supermarket shelves approximately two days later. 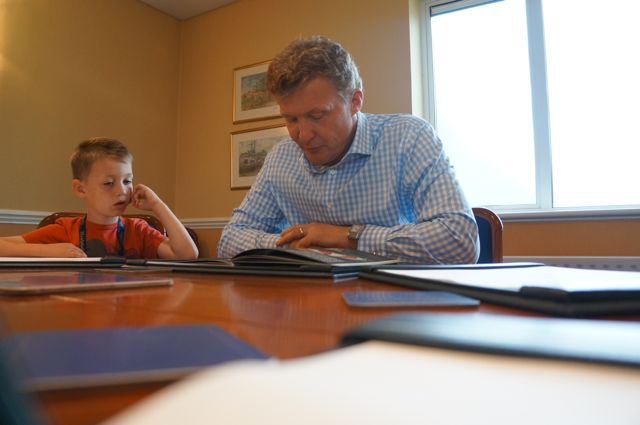 They employ around 150 staff members in Cornwall.

Throughout our delightful afternoon with the team, I couldn’t help but get truly geeky when it comes to afternoon tea. I asked Nick Rodda where he would suggest anyone visiting Cornwall should go for the perfect cream tea… His response was a troubled one, as there were far too many places for him to suggest – a man after my own scone-loving heart! If you were going to go anywhere in Cornwall for a cream tea, then his advice is to go for a scenic view above all else!

The Rodda’s team are actually looking into the “psychology of a cream tea” currently, which led to quite the conversation around our afternoon tea table. You’ll have to wait and see what their findings are, as the research is still being conducted – exciting! 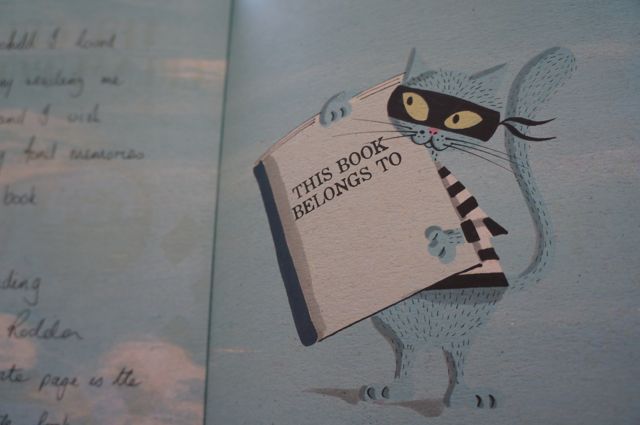 Rodda’s clotted cream is not only produced for us here in the UK (with Ascot, Christmas and Wimbledon keeping them very busy indeed!)  – it also goes to Germany, Japan, South Africa and Spain!

Concorde used to serve Rodda’s clotted cream on their flights.

If you’re stuck for a gift or souvenir idea, then look no further than this beautifully written and illustrated book; “The Great Cream Robbery”. 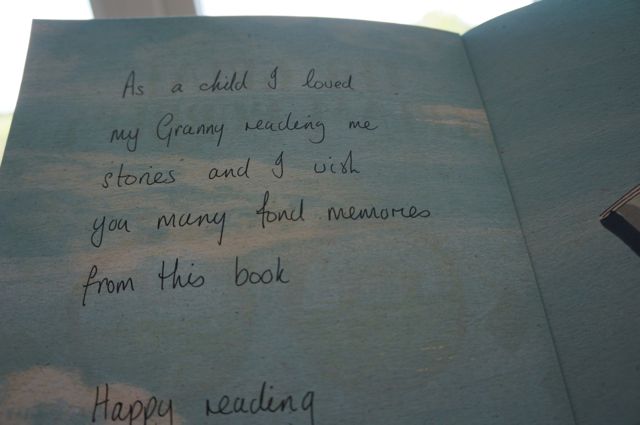 Nick personally read this book to the children on the day of our visit is he’s very proud of the story, which holds not only a cheeky little story about their clotted cream, but also their strong values within it.

Merryn the cat even came to visit us whilst we enjoyed our afternoon tea, we really did get the Royal treatment, the kids were thrilled! 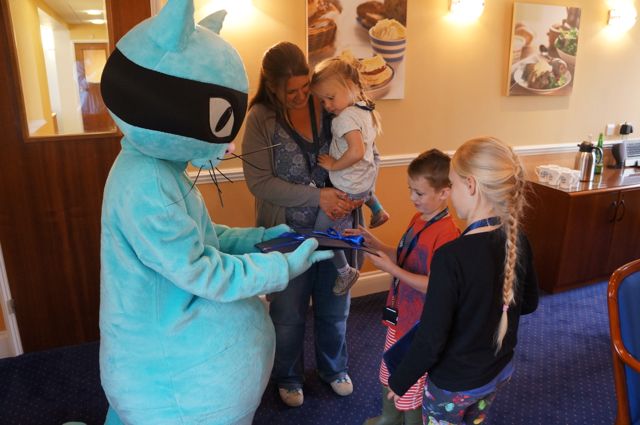 I honestly can’t thank Belinda, Zoe, Nick Rodda and the entire team on the day for making this such a truly memorable experience. I’ve been speaking fondly of this ever since and will be continuing to do so for the rest of my life – genuinely!

Ps – I’m judging the latest round of Rodda’s “Crown Your Puds” competition entries, so take a look here for more info and to enter your own treats! 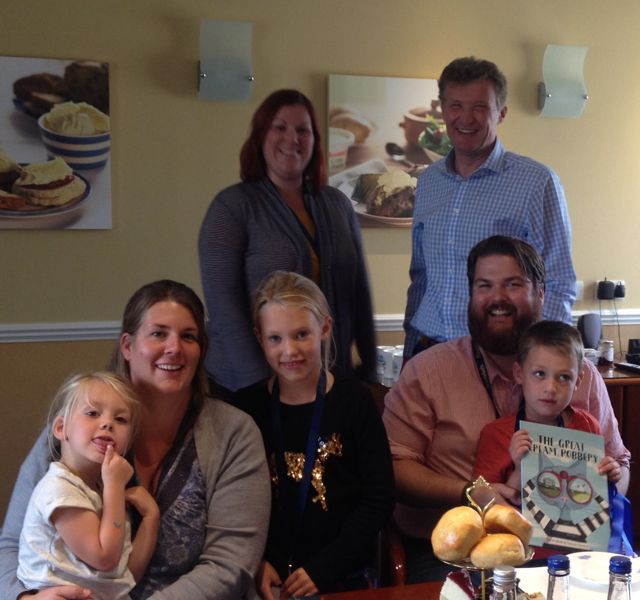 Read my new “About Me” page here!

You can also read about Miss Sue Flay’s “Around The World In 80 Stays Challenge”and other Secret Stays & Reviews here.

Any questions or to discuss a “Secret Stay” or review, please do email:hello@misssueflay.com

All images © 2015 Miss Sue Flay, these may not be used or reproduced without written permission from the owner, many thanks in advance.